Will my Breast Implants Affect my Mammography? 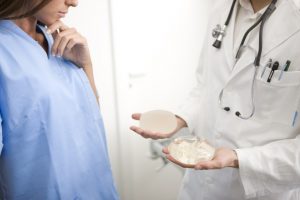 Breast augmentation has been the number one cosmetic surgery in the United States for well over a decade. As of 2010, it’s estimated that slightly over 5 million women have undergone the procedure.

Do you have breast implants and worry they will prevent you from getting an accurate mammogram? Have you avoided mammography completely since receiving implants because you’re afraid they will rupture during an exam? If so, rest assured that even though breast implants do add some challenges to mammography, trained doctors and technicians have the expertise to conduct a thorough, accurate mammogram on women who’ve undergone breast augmentation.

How Do Breast Implants Affect Mammography?

As a woman with breast implants, it’s important to know that implants do hinder getting a complete view of breast tissue during mammography. However, where the implants are placed makes a big difference. Implants that are placed under the chest muscles are much less likely to interfere with a mammogram than those placed above the chest muscles.

Breast implants contain silicone or gel that shows up as a white, opaque mass on a mammogram. Various studies show that between 15 to over 50 percent of breast tissue is obscured by implants. Additionally, placement of the implants can change how natural breast tissue is situated. The implant can press down or displace natural tissue, making it harder for doctors to notice calcifications, distorted tissue, and dense, small tumors. Further, scarring near the implants causes the buildup of harmless calcifications that mimic the look of cancer masses.

Should I Get a Mammogram if I Have Breast Implants?

Yes. Even though breast implants cause some challenges in mammography, getting a scan is your best chance for detecting early stage breast cancer. Seventy-five percent of women who are diagnosed with breast cancer have no family history or other risk factors. Since mammograms became the standard in the early 1990s, the death rate for women with breast cancer has plummeted by 33 percent.

Since millions of women have breast implants and doctors are trained to adapt their testing for it, it is possible to get accurate mammography results. First, the technician will take four scans of each breast instead of the standard two. Second, one of the scans will include a view of the implant pushed against the chest wall while the natural breast is pulled forward for optimal imaging. This scan can improve the accuracy of the mammogram by up to 92 percent.

Do Breast Implants Increase My Chance of Getting Cancer?

Not at all. In fact, various studies have shown that women with breast implants actually have a lower rate of breast cancer than the general population.

While there are unproven theories about why the incidence of breast cancer is lower for women with implants, the prevailing wisdom is that the implants themselves are not the reason. It is possible that women with implants have a reduced cancer risk because most tend to be thin (obese women are at much greater risk) and are from a higher socioeconomic group with greater access to good nutrition, exercise, and preventative health screenings.

Where Can I Get a Mammogram on Long Island?

At PURE Mammography, our caring and dedicated staff’s top priority is providing you with an accurate mammogram in a comfortable, relaxing setting. At PURE, we use the latest 3D imaging equipment that guarantees accurate results while you relax in our spa-like exam rooms.

No appointment is necessary at PURE. Stop by today for your mammogram or call us at 631-652-3424 to make an appointment.